I’m a nervous traveler. You don’t really need to know that, except that it will explain why, when I went to bed at 10pm the night before we left, I didn’t fall asleep for nearly an hour, and why I woke up every 15 minutes to make sure I didn’t miss my 2: 45am alarm. I was just thinking of every single thing I had to do when I got up, and of every single thing I should have done but didn’t before I left. And about all those things that might happen, but probably won’t, of things that won’t happen but probably should, of things that should happen but probably not when they need to…I know you’ve been there.

We left at 3am to make the ~6-hour drive from our house to Los Angeles where we could board the ship any time between 11am and 4pm. That’s right. I built in an extra seven hours, during which I would have nothing else to do but imagine what could go wrong later on the trip.

I worried that it might be hard to find the boat, to find parking, to find breakfast close to the dock. It wasn’t. There was really only one boat, and it had Mickey Mouse on the funnel, and you could see it from the freeway. Right in front of that one boat was one giant parking lot with one driveway leading to it. A block away was The Grinder – a sort of Denny’s knockoff with easily the worst food I have ever had ever in my entire life. None of my imagined problems materialized. 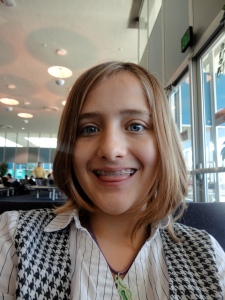 Boarding was exactly like getting on any Disney ride. Any time you get onto a Disney ride, the queue is shuttled from one room to another so that you’re always moving, you never see the tail end of the line, and the number of people in any one place never seems to change. And just like at Disney theme parks, every single person: the guy who took our luggage, the guy who directed us through security, the woman who took our picture, the woman who directed us into a giant waiting area, and every one of the eight thousand adrenaline-addicted, polo-shirted employees who roamed the rooms looking for unoccupied children to harrass – every one of them evinced a level of cheer that required shouting. 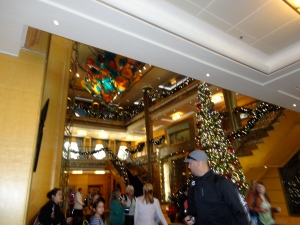 When we got on the boat, we had to stand in a sort of line because as each family walked through the doors, a man in white livery boomed cheerful things like “Let’s hear you make some noise for THE GAZPACHO FAMILY!!!!!!” or “Welcome back THE PARTRIDGE FAMILY!!!!!!!!!!!!” (and he enunciated each of the exclamation points, I swear). Then a phalanx of other white-liveried individuals applauded with ecstatic grins on their faces. But there are four people in our family, and we don’t have a common last name. Disney really doesn’t have a paradigm for that, and they wouldn’t announce us individually. Instead, they mispronounced both my last name and the Pirate’s last name, and then the manic applause began. This is how I can tell that I’m not cut out to be a celebrity. When faced with the applause of a crowd of people, I have no idea what to do apart from looking around uncomfortably and muttering under my breath.

Our luggage wasn’t in our room yet (I think it’s delivered by the same house elves that Hogwarts uses), so we went up to the top deck with the really, really loud swimming pools and cafes. Within minutes of boarding, I had a poolside table, a gin and tonic and an order for champagne to be delivered to the room. Thank you, Pirate!

I had booked a mani/pedi for 1pm, so I showed up to the spa. I was the first person to visit the spa, so once again I was assailed with friendly, cheerful greetings to which I had no appropirate response. The mani/pedi was as wonderful as those particular procedures always are, and Cameel, the lovely Jamaican woman who provided the service, and I talked and sang and bonded while she was sloughing off my calluses. When I left, she wanted a hug and told me I was the most fun customer she’d ever had. As did the woman in the gift shop from whom we bought a watch, and Yusef and Lavendra, the two men who have been assigned to wait on us at dinner for the entirety of our stay. What this tells me is that one of the keys to getting a job with Disney is the ability to fake sincere friendship. That’s really the key to getting a job pretty much anyplace, but they’re really, really good at it here. I know it’s an act, but I’m a sucker for it all the same.

Dinner was in the animation-themed restaurant “Animators Palate.” The walls are covered with black and white drawings from various Disney movies, and there are giant paintbrush-shaped columns scattered around the room. The bristles of the brushes are glowing LED things that light up various colors. The paintbrushes hold up what look like giant artist palettes with blotches of paint on them. The paint also lights up in different colors. The friendly waitstaff wore black-and-white vests with drawings of Mickey in various styles. At the end of the meal, the main screens showed an INCREDIBLY LOUD film about how wonderful and magical and fabulous Disney is, and then Mickey Mouse came out, did a hyper little dance, and then the waiters, now all dressed in rainbow-colored vests, danced around as well. Good golly.

By this time, I was barely hanging on. I was dizzy and having a hard time getting excited about any of the upcoming events, mostly because all I could think about was being able to sleep – two and a half hours just isn’t quite enough. The girls, who had both had good nights’ sleep, took off to the various kid activities, and the Pirate and I passed out at about 8:00. So much for kicking off the cruise. We found out later that both girls had been in and out several times while the Pirate and I slept, and we never heard them.