I started dyeing my hair when I was a kid. I was dating a guy who bore a marked resemblance to Ron Howard. He was dumb as a stump and didn’t have the ambition that God gave a grasshopper, but he had the most beautiful strawberry-blond hair ever. After I kicked him to the curb, I realized that I didn’t need him to have access to lovely Titian locks. It was then that I first turned to the embrace of Miss Clairol.

Strawberry blonde, chocolate cherry, black, copper…first I went through all the natural colors. But then, after I hit 40, things took a more interesting turn. When my grandmother died in 2002, I started dyeing my hair black. But in 2006, I started adding fire-engine red. And then blue. And then green. Think Ramona Flowers from Scott Pilgrim vs. the World. 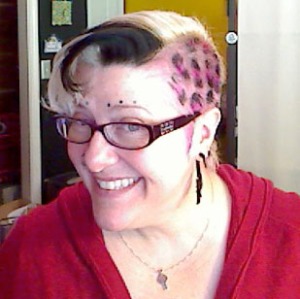 I used to wonder why every freak on every bus, at every bar, on every airplane seeks me out and shares their alternate world view with me. But, if I'm honest with myself, I can see why they might believe I share their unique views.

Tuesday, a friend who saw the new do for the first time said “I would be afraid that people would laugh at me.” I told her that I’ve never been laughed at, and another of my friends laughed at the very idea of my being laughed at.

I have to be honest: never, in all of the years I’ve been dyeing my hair, have I ever thought “What will other people think about this?” The first time I shaved my head, one of my co-workers (at the time, I worked at a large company) asked me “What is your boss going to say about it?” I told him that I had no idea, and I didn’t much care.

I’ve always believed that other people’s opinions are none of my business unless they choose to share them. The great thing about that philosophy, is that it dovetails nicely with human behavior. From the time I got my eyebrow dots in 2008, I realized that people’s reactions tell me everything I need to know about them.

People who hate the way I look, people who judge me as stupid or crazy or otherwise lacking, they write me off. There’s no good telling me that my style is terrible, tasteless, offensive, etc., because I am obviously not a receptive audience to that message. Those people say nothing to me, and I never interact with them. The self-select out of my social circle.

Those people who admire it, and by extension admire me for doing it, will mention it, but they always qualify it with “I could never do something like that.” They’re paralyzed by popular opinion, but they somehow wish they weren’t. They want the vicarious pleasure of associating with someone who isn’t constrained in the way they feel themselves to be constrained.

The last group are the people I’ve come to think of as “my tribe.” They may not have the same tattoos, the same dye jobs, the same piercings, etc., but they do share a similar trait: none of them worry themselves about what other people think. They make art, they found businesses, they create grassroots social movements. They see the badges of my opinions and they love them.

I’m proud to be one of them. Or even just to look like them.