I want to apologize to my laundry. For seven years now, the Pirate and I have had one of those high-efficiency front-loading washing machines that barely dampens the clothes, infuses them with just enough thin detergent that they smell good, and then barely dampens them again before spinning them to within dashing distance of dry. I apologize because that’s almost exactly how the showers on this boat work (minus the spinning bit), and it’s annoying. It looks like there’s water coming out of the shower head, but I can’t actually feel it, and at no point is my skin any more wet than it would be on a moderately humid day. I would take an actual bath, except that the “bathtub” is the size of the utility sink in our laundry room at home. Maybe I’ll let my clothes feel some vacation love by putting them in the tub, filling it with water and a little bubble bath, and giving them a nice, long soak.

I also want to go on record as saying that I have never had any use for the ocean. Yeah, yeah, I get that it provides the bulk of the world’s oxygen (but that’s not even the ocean itself – that’s the kelp in the ocean). And that it also provides some incrediby tasty fish. But it also exists just to fake me out. I sit on the verandah of the room and look out over the water hoping to see whales or dolphins or sea otters, but no. From our room, all we can see is freakin’ ocean, and if you fix your eyes on a single point you will eventually see something that looks like a breaching whale off in your peripheral vision. So you look at that spot and realize that it’s just some stupid waves. But as you stare at those, a pod of dolphins jumps just at the edge of your peripheral vision, so you look there. But it’s more stupid waves. Sea otters surfacing: more waves. Flying fish: more waves. Ocean, you’re like the father of the planet. Large, powerful, and boring as all hell.

We had boarded the boat at lunchtime on Monday, and so already knew the boat inside and out (as far as our hanging off the verandah of our room would allow). So…what else can you do? Every night, you get a little newsletter in your room that lists the activities available for the next day. On Wednesday, our second day at sea, there were 33 activities listed for “family,” 33 specifically for “adults,” 113 separate activities spread among the various kids’ clubs (there are 4 for different age groups), and 18 character appearances, movies, live band events or mini parties listed between 8:30am and midnight just on Wednesday. I’m sure you could be bored if you wanted to, but you’d really have to work at it. 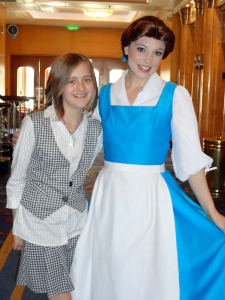 The characters hang around for a photo op, then it's back to whatever their day jobs are - Belle also works in one of the gift shops.

Some of the activities were all of the parlor-game variety: scavenger hunts, trivia contests, crafts like origami and animation. There are also tons of fitness classes, lots of dance parties, lots of athletic events (free throw contests, putting contests, soccer contests). And even if you weren’t up for a constant regime of dancing, gym attendance, etc., it was easy to work off the rich food because there are 11 decks on the ship. We were on deck 7, which was entirely taken up with staterooms. To do anything, we either had to go up 2 decks to where the pools and fitness club lay, or down 2-4 decks to where the shops, restaurants and lounges were, and we never took the slow, tiny elevators. 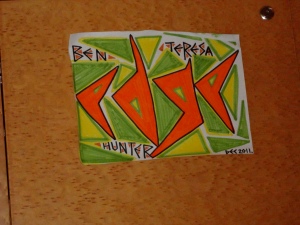 By Wednesday night, we were in bed early (and exhausted), ready for our Thursday adventure: zip lining over the jungle!