Today, we got off the boat in Puerta Vallarta. I must say that one of the things I really loved about booking the cruise was that a good two months before we set sail, we were told “Now’s the time to book your port adventures!” There was a big list of things to do while in port, and all we had to do was choose and sign up on the same website we booked the cruise.

Thursday we got up early, ate a giant breakfast, and toddled down to the bar where we were to meet up with the rest of our group for the zip lining and rappelling adventure! In Puerta Vallarta, we walked off the boat and around the corner to another boat that was like a large rubber life raft.

We may never see these people again, especially if we're eaten by jaguars

The rubber life raft thing took us at a hair-snatching rate of speed from the Area Militar de Vallarta, where our ship was docked, south about 30 kilometers to a place called Boca de Tomatlan. We got off that tiny boat and onto the kind of trucks that you normally see in old movies transporting soldiers who are going to meet their deaths in a hailstorm of enemy fire. So, not confidence inspiring. 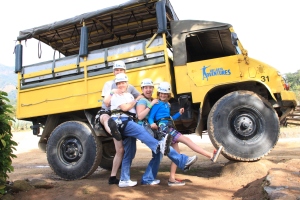 This is the dance of joy we did just after kissing the ground once we got off the truck.

The trucks took us another 5 or so kilometers to the preserve where we were to meet our fate. On the way, we all laughed and joked about the fact that the roll cage over the benches lining the truck bed had straps hanging from it so that if we were accidentally thrown from the truck, we would end up flapping behind the truck like a pair of underpants on a clothesline, only with less dignity. Adversity makes people bond together, and we were practically a solid mass of humanity by the time we got there.

After strapping us into harnesses custom-made to ensure wedgies, chafing and complete stripping of pride, we were ready to mount the mules that would take us to the top of the mountain. 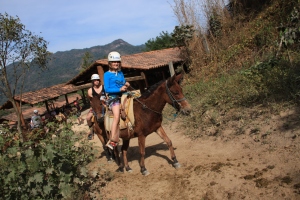 The little kid was really excited about the mule ride, but her enthusiasm was short-lived.

From the top, we took a series of zip lines and sheer cliff faces to descend. 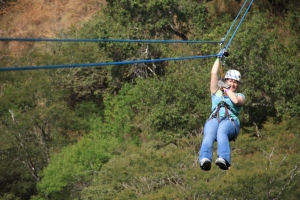 It's over 160 feet straight down if she falls, and nearly half a mile by trail to get back up. Good thing she didn't fall.

The zip lining was fine although, in the interest of full disclosure, I have to admit that on the very first zip line I was so frightened that I closed my eyes and ended up getting stuck about 8 feet from the end, suspended over what appeared to my closed, terrified eyes to be a bottomless pit, and I ended up having to haul myself hand-over-hand to the platform where I was roundly laughed at by monkeys and native guides. Good thing I’d left my pride behind with the mules!

Close to the end of the zip lining was the lowering-ourselves-down-a-cliff phase. For those of you who might be interested, here is a monkey attached to the side of a cliff by ropes: 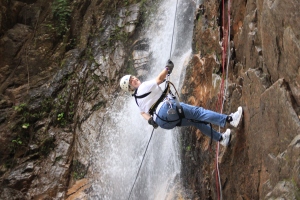 I never saw the waterfall because I was too busy trying to find that place where I should have put my foot and didn't.

On the last zip line, we were whisked directly into a picturesque mountain pool.

The Pirate has just slid nearly 70 feet down to land in this lovely emerald pool.

After this last zip line, it was just a matter of a half-kilometer hike back to our starting point, but that half-kilometer hike took us through streams, over creeks on fallen logs, and between enormous shrubs that are probably older than I am. We were hot, soaking wet and hungry, but it was easily one of the coolest things we’ve ever done.

On the way back, the bus stopped at a tequila distillery where Peaches (who’s of legal drinking age in Mexico) took her first taste of tequila. 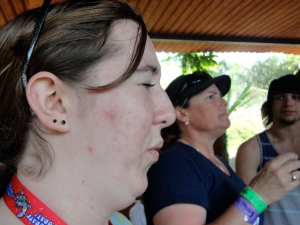 Here's Peaches, sampling her first tequila. Of course, the first sample is the rough stuff.

We got back onto the speedboat thing, where we were whisked back to the ship via a pair of enormous rocks covered in pelicans.

Technically, we could have strolled through Puerta Vallarta for another hour or two before we had to be back on the ship, but all we really wanted was hot showers and dry clothes. I think that’s now my new measure of the success of an outing: if all you want is a hot shower and dry clothes, it’s been an actual adventure.