We went to sleep Thursday night in Puerta Vallarta and woke up Friday in Cabo San Lucas. What really struck me about Cabo is the fact that, from a distance, it looks almost exactly like Phoenix with an ocean in front of it.

The saguaro-dotted hills in the background, the color and design of the buildings, all look to me like Phoenix

In Cabo the harbor is too small for a cruise ship to dock, so we boarded smaller launches that took us in. From the harbor, we boarded a bus that took us the whopping half mile to Mi Casa restaurant, which looked like a cross between a taqueria and the site of a luau.

The koi pond, the hanging lamps, the festive decorations and the music all made for a party atmosphere

First, we had the same kind of food that I’ve had at practically every family party I’ve ever been to since I was a little kid. Meat, tortillas, soup, rice and beans and various salsas – it was all delicious, and all the better since I neither had to cook it nor clean up afterward. 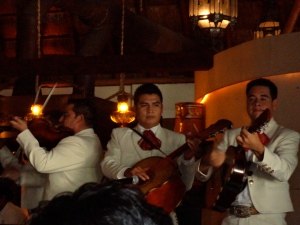 I can only think that their white, gold and black outfits gave them their name. Or their smell.

Once we were done eating, it was time for the mariachis. The name of the band was Huitlacoche, although I can’t for the life of me decide why. But they sang all the mariachi songs that Americans would expect to hear, and after a little while, folks (mostly tiny people) started getting up to dance.

In between numbers, the folkloric dancers came out. When they said “folkloric,” they weren’t kidding. The first number had an Aztec flavor.

The costumes were a little hokey, but the whole thing was fun, especially the part where the men set their leg hair on fire. No, I'm not kidding.

Later, they did other traditional dances in other costumes in between mariachi numbers. The only thing this party was lacking was that bunch of relatives that had too much to drink and start yelling at everybody.

Finally, it was time for DJ Roberto – an energetic guy who came out and told jokes and got the crowd going. The first time he came out, we applauded, but not nearly enough, so he said very seriously, “I’m gonna pretend that didn’t happen. I’m gonna come out again and you guys are gonna act like I’m Justin Bieber!” and he marched himself offstage and then came back on again to a crowd gone wild. He posed and threw kisses and otherwise hammed it up, and then got the kids up for a Mexican version of musical chairs called the Hat Game. The kids were put in a circle and given a hat. While the music played, each child had to put the hat on, spin in a circle, and then pass the hat to the next kid. If you had the hat when the music ended, you were out.

The kids are all ready to play the Hat Game. According to the Badb, the hat, an old leather cowboy hat, smelled like lipstick.

After the Hat Game, we were taught the tequila dance (the one you dance to the song “Tequila”), and then we decided to leave so that we could walk back to the dock instead of taking the bus for half a mile.

We stopped at a little shop to get some souvenirs and met Filomena and her children, who were adorable. 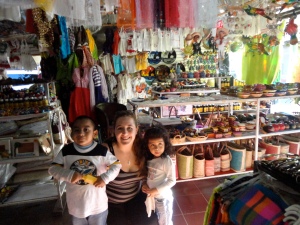 Children all over the world are always happy to mug it up for the camera. For the rest of our visit, the little boy kept making himself available for photo opportunities.

This was more a party, not an adventure, since we didn’t need hot showers or dry clothes when we got back to the ship. But if we had needed a hot shower, the little guy we found waiting for us would have been only too happy to help: 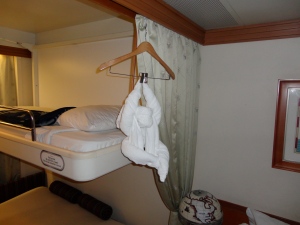 Every night, we got a different towel animal. Today's was a monkey that we kept for the rest of our cruise.

The Pirate and I were so inspired by the towel animals that we were excited to attend the towel origami class offered on Sunday. I can now make a monkey, an elephant, a bear, a swan – you name it, and I can fold it out of bath towels. So…if this writer thing doesn’t work out, I have a fallback position.