On October 22, 2019, I had a sleeve gastrectomy. I went into this process knowing that this would forever change my relationship to food and my body. This is part of a series of posts covering my history with food, weight loss, and my body. All opinions expressed in these posts are my own, and reflect my own lived experience. Nothing said here should be generalized, or taken as a suggestion for others. If you’re considering weight loss surgery, your first step is to reach out to your doctor.

Let’s start at the beginning.

When I first went to the doctor for a consultation, I weighed in at 243.8. For years, I had gone to every doctor’s visit and refused to be weighed. For most things, that datum isn’t relevant. I wasn’t surprised by the number, but certainly I was disappointed by it, although in a way, hopeful. My biggest fear was that I wouldn’t qualify for surgery. According to my doctor, the criteria was either a BMI of 40 or more, or a BMI of 35 or more and one or more co-morbidities – obstructive sleep apnea, high blood pressure, diabetes, high cholesterol (yes, no, no, no).  My BMI was 39.6. I was so relieved that I qualified, I nearly cried.

At that appointment, I was given a pre-surgery consultation appointment about 2 weeks later where I would receive my surgery date, get all my pre-surgery instructions, and get a list of the resources that would help me both before and after the process.

At the pre-surgery appointment, I was told that I needed to lose 5-10 pounds before surgery in order to shrink my liver (the stomach is under the liver, so shrinking it makes surgery easier and safer). And in the 2 weeks since my initial consultation, my weight had gone up to 245.4.

Ten days before my surgery, I started a liquid diet. Three times a day, I had a protein shake and a liquid protein drink. The shake was big, and could be really thick, so the ten days went by pretty quickly without my feeling very deprived. When I did feel sad, I could just look at the calendar and say “I can do this for another 5 days.” On the day of surgery, my weight was recorded as 238.7.

Where Do You Want to Be?

When I first considered this surgery,  it was because I had had back issues for years. I couldn’t lay in bed for more than a couple of minutes after waking, because the pain in my lower back (from the blown disc I talked about in Part 3) would become excruciating.  In the last year, I’d also had a problem with my left hip – it hurt when I lay on my side, or when I sat for too long. The doctor diagnosed it as bursitis. (I think if you’re old enough to have bursitis, you automatically have to put “the” in front of things like Google and Facebook.)

As I filled in the paperwork for surgery, I was asked several times what my goal weight would be. It was frustrating because even though the women recording my information were very encouraging and said “It doesn’t matter, we just have to put something down,” they didn’t give me any guidance. They told me what my BMI was, but not what a “healthy” BMI should be, nor what that would translate to in pounds. A “healthy” BMI is between 18.5 and 24.9, which would put my “healthy” weight between 115 and 154. That’s a 40-pound spread.

It’s really hard to know what your “ideal” look is, because even women of the same height and weight can have very different body types. With no guidance, I arbitrarily chose 160. I now know that the number you choose is important – it’s what the doctor will use to qualify whether your surgery and long-term outcome are a “success,” which is defined as keeping off at least 50% of your excess weight for 5 or more years. The success rate of gastric sleeve surgery is upward of 80%.

Doing a little math, we can see that my goal weight is 85.4 pounds less than my highest starting weight. I lost a few pounds before surgery, and as of right now, I’m down 21.6 pounds from that highest weight. It was easy, because for the first two weeks after surgery I was on a completely liquid diet, drinking clear protein drinks recommended by my doctor. Each packet of powder was to be mixed with ~8 ounces of water, and it was really, really hard to get that much stuff into my body. Surgery hadn’t just cut off a huge portion of my stomach, it had left my insides swollen and uncomfortable. Often in the first couple of days, I would take a sip of water and then struggle not to vomit. Over the next few days, drinking all my protein got a little easier, but that protein stuff is kind of gross.

Now, two weeks in, I am on “blenderized” food – any food that can be sucked up through a straw. At first I joked about putting pizza and burgers into the blender, but I had a huge secret.

I am terrified to eat real food.

I’m still in that mindset of “my food choices got me into this in the first place.” To top that off, the advice given for life after surgery can be conflicting – I need to get a specific percentage of protein, carbs, and fat, I need to get at least 60-80 grams of protein a day, I have to drink 60 ounces of water, but I can’t drink either 30 minutes before or 30 minutes after a meal, and I have to eat 5-6 times a day, and I should make my meals last 30-60 minutes. I can’t eat cruciferous vegetables for a few months after surgery, I can’t eat red meat until at least 6 months after surgery….I am paralyzed.

I said this to the doctor on my first follow-up visit, and he gave a small laugh and just said “You’re overthinking this. Just eat food. Nothing processed, wait on anything with too much fiber, no simple carbohydrates.”

The best advice I was given came from the dietitian I had to consult before my surgery. She told me to eat slowly enough that I would be able to tell when I went from “I’m hungry and want more,” to “I’m no longer invested in this.” Not waiting until I was full, but waiting until the food was less important.

To this end, I bought myself a set of coffee spoons and dessert forks. I already own a fairly large selection of sushi plates and sauce dishes, as well as a food scale. 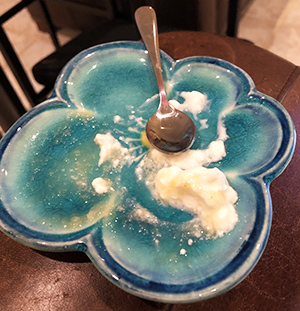 The remains of 2 ounces of cottage cheese and 1 ounce of unsweetened applesauce.

When I talked to my doctor about using tiny utensils and plates, he sort of laughed at me, as though it were some kind of affectation. What this tells me about my doctor is that, while he sees and deals with the bodies of severely obese patients every day, he doesn’t have much insight into the mental processes of the severely obese. By taking tiny bites, I can tell exactly how I’m feeling as I eat, and can pay attention to the point where continuing to eat is no longer compelling.

It’s a challenge. I’m supposed to eat 5-6 times a day, but I can eat 4 times, tops. Even then, I’ll portion myself out 3 or 4 ounces of food and can’t finish it. I have no idea how much longer that’ll be the case, but I’m really, really hoping that the habits I’m establishing now will have solidified and be the foundation of how I eat going forward.

Next time, I’ll talk about the ins and outs of self image for the fat.